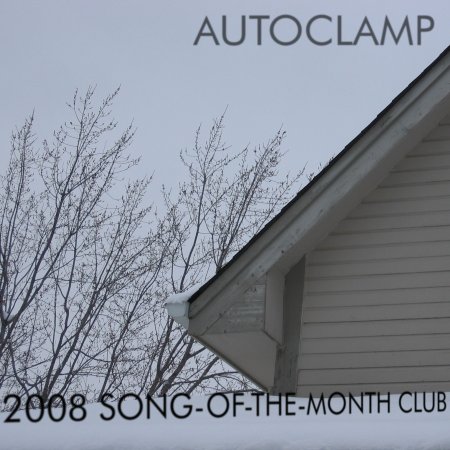 These are the collected tunes from Autoclamp’s 2008 Song-of-the-Month Club. This is our attempt to write and record one song a month in 2008.

January – Georgie, You’ve Been Had
In case you were wondering, Georgie is a woman in this instance.

February – Nearest Possible Friday
I was listening to a lot of the Pipettes at the time.

March – The Twins and the Baby
A murder ballad on its way to becoming a double-murder ballad (not of the twins or the baby).

April – Only Time Can Stop the Healing
I’m not sure what this song is about.

May – This is Halfcore
Nor this one.

June – Carrie
An attempt at writing a slow song with a different rhythm than I’d normally use.

August – Portmanteau
Thanks to Nancy Rost for pronunciation guidance.

September – Patsy Tipton
This song was inspired by a computer-generated name in my spam folder.

October – Toho and Ealing
A simultaneous ode to loneliness and to two great movie studios on different continents.

November – The Long Fade
A completely non-fictional love song, which makes it an double anomaly in the Autoclamp catalog.